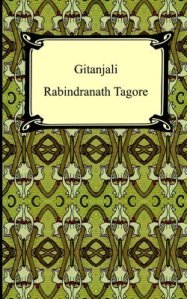 Gitanjali (Song Offerings) is a collection of poems Rabindranath Tagore wrote to express devotion to God. The word gitanjali is composed from “git”, which means song, and “anjali” which means offering, and thus mean “an offering of songs”. I decided to read a work by Tagore to take part in Blogger Buku Indonesia (BBI)’s project for October which is to review any work by Nobel laureates, because of these reasons:

I believe you have read reason number #2 and #3. In today’s words, I would say that those two reasons are “DOUBLE AWESOMENESS!” And so I read all 103 songs of Gitanjali. From the very first song I felt like I was thrown up in the sky to behold the majesties of God, but in such a familiar way. Reading it felt heavenly, but still natural, as if seeing face to face with your own father.

Thou hast made me endless, such is thy pleasure. This frail vessel
thou emptiest again and again, and fillest it ever with fresh life.
This little flute of a reed thou hast carried over hills and dales,
and hast breathed through it melodies eternally new.
At the immortal touch of thy hands my little heart loses its limits
in joy and gives birth to utterance ineffable.
Thy infinite gifts come to me only on these very small hands of
mine. Ages pass, and still thou pourest, and still there is room to fill.

In Gitanjali, the author distinguish The Creator and His creation; he presented the human character as a lowly being, dressed in rags, full of debts and failures, waiting for the Lord to pass by her house. He also praised highly the beauty of nature in his songs. However, I am puzzled that in some songs Tagore addresses God as my friend, my master, my king, and my Father. This resembles how Christians address God (especially “my Father”). I even found a similarity between some lines from Gitanjali and some lines from the Scripture. Here it is:

“In the night of weariness let me give myself up to sleep without struggle, resting my trust upon thee.” (Gitanjali: 25). Is this not similar with Psalms 4:8: “I will both lay me down in peace, and sleep: for thou, LORD, only makest me dwell in safety.” ?

This is my prayer to thee, my lord—strike, strike at the root of penury in my heart.

Give me the strength lightly to bear my joys and sorrows.

Give me the strength to make my love fruitful in service.

Give me the strength never to disown the poor or bend my knees before insolent might.

Give me the strength to raise my mind high above daily trifles.

P.S.: This is my first time ever to review a collection of poems, so please forgive me if this post is somewhat short. 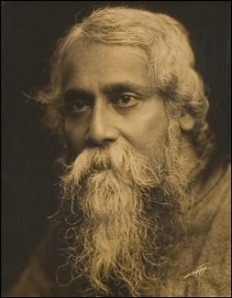 Rabindranath Tagore (7 May 1861 – 7 August 1941) was a Bengali artist who wrote novels, short stories, poems, plays, essays, and also composed music. In 1913 he was awarded Nobel Prize in Literature “because of his profoundly sensitive, fresh and beautiful verse, by which, with consummate skill, he has made his poetic thought, expressed in his own English words, a part of the literature of the West.”

Gitanjali (Song Offerings) is his best known work along with Gora (Fair-faced), and Ghare-Baire (The Home and the World). In music, his compositions were chosen by two nations, India and Bangladesh, as their national anthems. And the composer of Sri Lanka’s national anthem was a student of Tagore, and the song is inspired by Tagore’s style. Tagore was highly influential in introducing the best of Indian culture to the West and vice versa, and he is generally regarded as the outstanding creative artist of modern India. (source: Wikipedia)

What do you think? Cancel reply